The overall rating is based on review by our experts

Samsung Galaxy A80 Price in Nepal with Full Specs, features, and comparison

Recently, Samsung has officially announced the new Samsung Galaxy A80. Yes the A90 is actually the A80 phone. Actually, A80 is the name they event for and Oh my god! this thing is insane. So, today we are going to revel the Samsung Galaxy A80 Price in Nepal with its features and specifications.

On Samsung Galaxy A80 there is the most unique and the best implementation of the pop-up camera design that only Samsung has pulled off. But, in order to achieve this amazing design there has been two major sacrifices. We gonna talk about it later.  But, let’s discuss the whole design of the brand new Galaxy A80.

So, from the front side you can see it has whole full-on uninterrupted amazing AMOLED fullscreen Display. But still  there is a little bit of chin down there. Hence, it’s not completely bezels less but still it is pretty close. Similarly,  like the other galaxy A-Series phones there is no bixby here which is nice. However, those who are thinking why the chin is there?. The chin is actually having all the display drivers. In order to get rid of the chin Samsung would have to fold the display towards the bottom something Apple does with their iPhone to hide the chin. Actually, this is a very complex process and it definitely increases the price. So keeping all that in mind Samsung went with a slight chin at the bottom and the rest looks pretty bezel less.

A80 has 6.7 inch  Super AMOLED Display with 1080p HD resolution. It has a pretty sharp display but it’s not gonna be as good as the galaxy S10 family. Because,  we have dynamic AMOLED Technology for that. Hence, that is something Samsung has reserved for its flagship phone we’re gonna see that on the Note 10 family. But, again this will be really really sharp as well and just in general design wise it is more futuristic than any other phone out there.

Camera Setup on Galaxy A80

Samsung Galaxy A80 looks absolutely incredible with its rotating camera mechanism. It has triple cameras inside rotating camera mechanism which can be used for both front and back photos. Hence, you get the same quality with your selfies and your rear camera photos. Furthermore, there is one 48-megapixel sensor coming at F 2.0 aperture along with 8-megapixel wide-angle lens and a TOF sensor for proper 3D depth sensing.

So it’s gonna be a really powerful camera setup and could actually be the best selfie phone. Because again the rear cameras can be used for selfies as well and with that the TOF lens you’re gonna get the best depth of field on a samsung phone. Actually, thanks to the TOF sensor for something called video live focus. which is something again Galaxy S10 family cannot do. Because they don’t have that.  Now the whole sliding and rotating process does take a bit of time. Hence, it’s not gonna be as fluid as your normal front camera phones

Top two sacrifice on Galaxy A80

Here is list form Samsung to sacrifice in order to make this awesome phone. The first one is headphone jack- in order to create more space it makes sense and then the second thing they did is that they removed the micro SD card slot. So you cannot expand the storage on this phone. But, it comes with 128 gigabytes of storage and that’s all the storage that you gonna get on this phone. For me personally, I don’t really use micro SD card because the 128gb of storage is actually a lot. But, just keep in mind the S removed that on this phone and also there is no headphone jack.

Now this phone is backing incredible power. Because, A80 is coming with the newly announced never-seen-before Qualcomm Snapdragon 730G. It’s not really a mid-range chip it is a high-end smartphone chip that might actually be really close to the Qualcomm Snapdragon 820. The fine performance in real life with Samsung’s One UI optimization. I do believe this phone will be really really fast combined with 8GB of ram. Multitasking will be amazing so it would be fun to do the speed test and see how powerful and capable Qualcomm Snapdragon 730 chip Is? But in general the gaming performance apps opening everything will be really really quick process on this phone.

Galaxy A80 comes with a 3700 mAh battery. Along with that it also comes with the 25 watts of superfast charging. Hence, you are getting the best fast charging performance on a samsung phone with this huge battery size. I’m definitely expecting at least a day of battery out of this bad boy.

Samsung Galaxy A80 Price in Nepal and Availability

Samsung has confirmed that the Galaxy A80 will be launched at around Rs 80,000 in Nepal. which means it’s gonna cost almost the same price as the Samsung Galaxy S10 e. This is really Amazing and interesting because S10 is a great phone. So I’m really looking forward to my hands on this phone and compared to the Galaxy S10 e. However, a lot will depend on the actual price when the phone comes to Nepal. The company says that the Galaxy A80 will be unveiled in the Nepali market in July 2019.

So let me know your thoughts in the comment section below what you think about these samsung galaxy A80. But, I do think it’s a better choice over the Galaxy S series. Actually, I would love to hear your thoughts and a quick reminder regarding this handsets. You can also follow me on my Instagram and Twitter. So that you will never miss an update from my website. 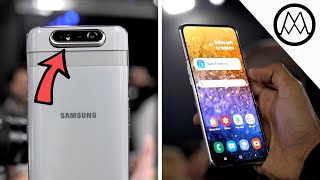 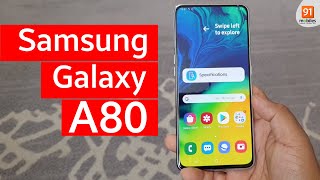 Translate site into your language

Top 15 Best Chinese Phones that you can buy in Nepal

How to Enable Full Screen Navigation Gestures on any Android